Irradiation Behaviour
Ever since its first creation for military purposes in the Manhattan project, uranium enriched to >90% 235U has been used for many peaceful applications requiring high fissile material densities. The use of High-Enriched Uranium or HEU (all enrichments >20% 235U are considered HEU) for civil applications such as driver fuels for research reactors, is considered a proliferation concern. As a result, since the 1970's, efforts have been devoted to the conversion of research reactors operating on HEU to alternative fuels using uranium with enrichment below 20%. These efforts include the development of high-density fuels to replace the low volume-density (mostly) UAlx based HEU fuels. This led to the development and qualification of an U3Si2 based dispersion fuel with a uranium density of 4.8 gU/cc in the 1990s. The typical fuel design for many European research reactors is an assembly of thin fuel plates consisting of a central layer (the 'fuel meat') of a fuel compound dispersed in a pure Al matrix. This layer is sandwiched between cladding sheets made from an Al alloy. Fuel plates are manufactured using hot and cold rolling processes.

For the conversion of high performance research reactors, a fuel density of >6.5 gU/cc is required. The USA, the main driving force behind the conversion requirements and an important supplier of HEU, led the efforts to identify such a fuel with a number of scoping studies to identify appropriate fuel candidates. This involved the irradiation of a number of high-density uranium compounds (RERTR-1 and RERTR-2 experiments) from which the U-Mo alloys with a Mo content of 7-10 wt% were chosen as the best candidates. The selection was based on good irradiation behaviour, sufficiently high intrinsic density (~16 g/cc) and availability of historic irradiation data from fast reactors. Due to the relatively important cross-section of Mo for neutron capture, a fuel density of >8 gU/cc is required, which means a volume density of roughly 50% in the dispersion is required or a monolithic fuel system (16 gU/cc) needs to be applied. In the beginning, the monolithic fuel was further developed in the USA, while Europe took the lead in the dispersion fuel development, even if a lot of collaboration with the USA was continued. This marked the start of a number of validation and qualification irradiations to build the knowledge base required to underpin a qualification of this fuel type. A series of irradiations were performed in the Advanced Test Reactor (ATR) at Idaho National Lab (INL), but mainly on sub-size fuel plates (micro- and mini-plates). In Europe, a choice was made to use only full-size plate irradiations, since they are considered more representative of real fuel assemblies.

The qualification approach adopted was similar to the strategy that was used in the 80's for U3Si2. In the first stage, pre-qualification irradiations with gradually increasing power and burnup were performed, eventually leading to the first high power testing. In Europe, the IRIS-1 irradiation performed in the OSIRIS reactor at a maximum heat flux of 140 W/cm2, using dispersion fuel based on ground (or comminuted) powder made by CERCA, yielded positive results. This led to the launch of a pre-qualification program, including the IRIS-2 experiment in the OSIRIS reactor at 230 W/cm2 and the FUTURE-UMo irradiation in the BR2 reactor at a higher power level (350 W/cm2). But the results obtained in these experiments were far from those expected.

Indeed, almost simultaneously in Russia, Korea, the USA and Europe, the first indications of failure of the UMo-Al dispersion fuel system were observed in high power irradiations. Excessive local swelling of the UMo-Al dispersion plates, described as 'pillowing', was observed in the high power zones of the plates. It turned out this was the consequence of excessive interaction between the UMo kernels and their surrounding matrix, leading to the formation of an amorphous interaction phase, which eventually plays a crucial role in the pillowing.

In older U-Al based fuel systems, Si was used to stabilise interaction and metallurgical considerations confirm that Si is expected to have this effect. As such, the addition of Si to the dispersion fuel matrix was put forward as a solution to the IL formation problem and a reorientation of the fuel development and qualification programs was performed. 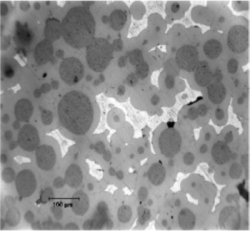 Again, the approach of gradual increase in power and burnup levels was followed in Europe by continuation of the IRIS experiments in OSIRIS with an IRIS-3 plate series using an Al-2wt%Si matrix. In the same period, the IRIS-TUM plates were irradiated, testing also the addition of Si to the matrix, but with comminuted powders instead of atomised powders. Positive results with important reductions in the IL formation thanks to Si were observed and confirmed by results obtained internationally.

However, the improvement was insufficient to suppress pillowing at high power conditions, but higher Si contents were believed to offer a final solution to this. Therefore, a high power irradiation, called E-FUTURE, was launched in the BR-2 reactor by the European LEONIDAS consortium, using U-7wt%Mo atomised kernels dispersed in Al-4wt%Si and Al-6wt%Si matrices . Unfortunately, pillowing was once again observed on these plates, albeit only at a burnup of >60% 235U, so a marked improvement over the level of 33% 235U reached with FUTURE-UMo, certainly since the Beginning Of Life (BOL) power in E-FUTURE (470 W/cm2) was also well above the BOL power in FUTURE-UMo (350 W/cm2). 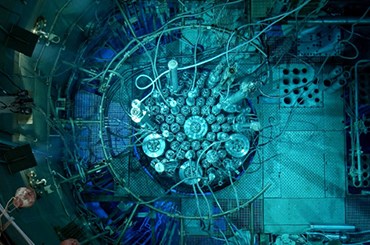 It was then considered that further development of the UMo dispersion fuel would require more elaborate solutions, unless a further increase of the Si content in the matrix and improved dispersion of the Si particles could resolve the problem. The latter solution was tried in the E-FUTURE-II experiment, while the former pathway gave rise to a number of modifications that were introduced in the fuel system. The main focus of these ideas has been to modify the UMo-matrix interface, where the IL is formed, and to assure that sufficient matrix material would be left at high burnup. As such, the CEA launched the IRIS-4 irradiation using pre-oxidised UMo kernels, while sputter coated UMo kernels were put forward in the SELENIUM project by SCK·CEN. This was also an attempt to avoid Si use altogether. The coating of fuel particles was also considered and tried internationally.

As it turned out that the ZrN coating effectively prevents interaction from occurring, except at the highest power locations, this solution was adopted as the reference. Nevertheless, the high burnup swelling of the ZrN coated plates was still observed to accellerate unacceptably above ~65% burnup. This was considered to be a consequence of recrystallisation occurring in the UMo fuel, causing grain refinement and enhancing fission product precipitation in bubbles and solid precipitates. This precipitation causes more pronounced swelling, eventually exceeding the capacity of the matrix to follow the swelling by creep and tearing the matrix internally. 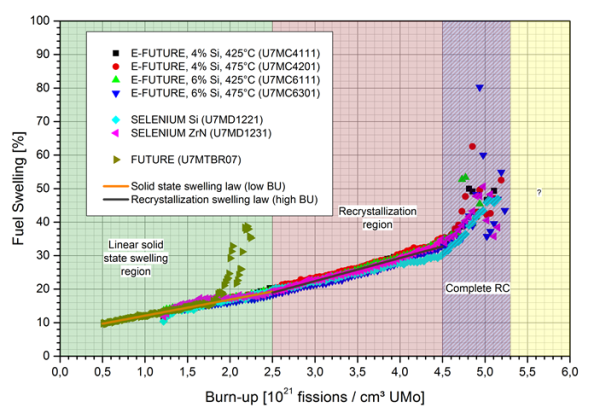 The HERACLES-CP project is intended to analyse the available datasets and come up with a systematic and comprehensive description of the phenomena that are occurring in these fuels. Furthermore, it is expected that mitigation strategies are developed that would allow a U-Mo based dispersion fuel to reach >80% burnup with beginning-of-life maximum powers of ~470 W/cm2. As the monolithic fuel system is also based on U-Mo alloy, many of the phenomena identified in the dispersion fuels will also occur in monolithic fuels and as such the data analysis will also benefit the development of the monolithic fuel system. However, for monolithic fuels, the main challenge lies in the manufacturing rather than in the irradiation behaviour. Without a matrix, interaction is limited to the fuel-cladding interface and can be mitigated with an interlayer. Also the recrystallisation, even though it will occur in much the same way as in the dispersion fuels, monolithic fuels benefit from the fact that they use a U-10wt% Mo alloy, in which recrystallisation only occurs at higher burnups than in the U-7wt% alloys used in dispersion fuels. Given the higher density of the monolithic fuels, they can live with the additional neutronic penalty of the higher Mo contents. Finally, even with recrystallisation, there is no matrix to tear when swelling exceeds the yield strength...

The ultimate test of a fuel system is the irradiation. This is where the SEMPER FIDELIS irradiation in the HERACLES-CP project comes in. The main purpose of this experiment is to verify the mechanistic explanations we have established in the comprehension phase and to demonstrate the effectiveness of the engineering solutions we have put forward to counteract some of the phenomena that were seen before. Ultimately, the Post-Irradiation Examinations of the SEMPER FIDELIS fuel plates will have to provide a sound basis on which to restart the qualification process for a U-Mo based dispersion fuel. 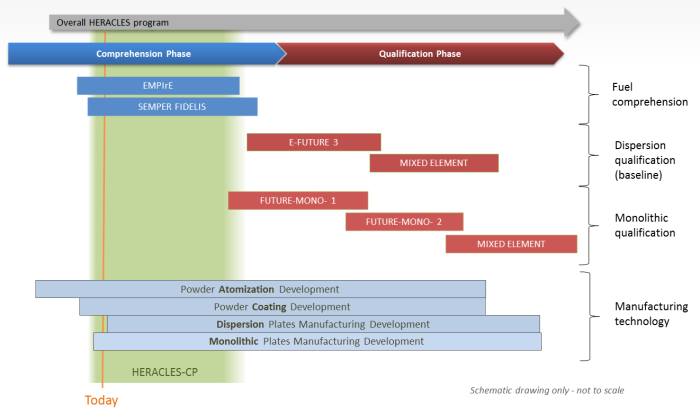